Each ACHE Regent is encouraged to provide an award for outstanding healthcare executives in her/his jurisdiction. ACHE supports two of these awards each convocation year. This year, Jarrod Johnson was selected as one of the two deserving honorees.

Jarrod comes to ECMC with over 19 years of healthcare experience. His most recent position was serving as Chief Operating Officer at Brooks Memorial Hospital (since 2012) where he was responsible for the daily operations of the 65-bed not-for-profit community hospital with a medical staff of 75. Prior to Brooks, he held the Chief Operating Officer position with Optim Healthcare in Savannah, Georgia.

Jarrod earned his MBA from Howard University, Washington, DC, and his undergraduate degree in Economics from Lehigh University, Bethlehem, PA.

About The American College of Healthcare Executives: ACHE is an international professional society of more than 30,000 healthcare executives who lead our nation’s hospitals, healthcare systems and other healthcare organizations. ACHE is known for its prestigious credentialing and educational programs and its annual Congress on Healthcare Leadership, which draws more than 4,500 participants each year. ACHE is also known for its journal, the Journal of Healthcare Management, and magazine, Healthcare Executive, as well as groundbreaking research and career development and public policy programs. 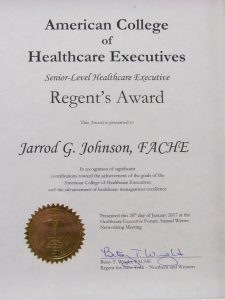 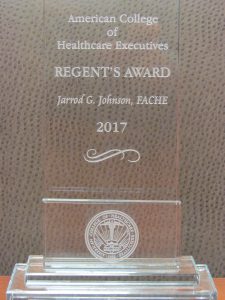