There are many ways to give to ECMC Foundation. For more information contact Susan M. Gonzalez, Executive Director, at (716) 898-5800.

Each year, thousands of patients come to ECMC with serious injuries and debilitating conditions seeking medical treatment and rehabilitation. Because of the high level of skill and dedication required to earn the designation of Adult Regional Trauma Center, ECMC is a magnet for outstanding physicians, surgeons, nurses, and other medical professionals. The following cases illustrate how the excellence of our trauma care translates to success at every level at ECMC, and what your giving can help achieve. 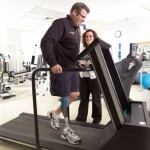 Helping a firefighter battle his way back.

Rushed to ECMC after being crushed by a falling chimney while responding to a fire with his unit, Mark Reed was treated by 17 physicians and a highly coordinated team of nursing specialists and therapists over the course of 52 days at the medical center. Mark’s wife, Nancy, a registered nurse at another hospital, and his parents were at his side throughout his treatment.

After many surgeries and a seemingly miraculous recovery, doctors told his family members that Mark had no permanent brain injuries. Like his second family, Mark’s fellow firefighters were frequent visitors and strong supporters during his stay at ECMC. A 10–year veteran of the Buffalo Fire Department, Mark Reed is currently involved in community service. 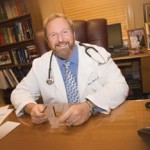 A cardiologist on the other side of care.

For Dr. Marc Kozinn, a cardiologist living near a large suburban hospital, his symptoms that night were unmistakable. When the paramedics arrived, he asked to be taken directly to ECMC. That’s because he knew at the time that only ECMC provided emergency lifesaving care for heart attack victims 24 hours a day, seven days a week.

Dr. Kozinn was rushed to one of the hospital’s cardiac catheterization labs and the team was waiting to perform an angioplasty. Using a surgical balloon, angioplasty opens clogged vessels to the heart. ECMC’s door-to-balloon time—the time from hospital arrival to when the balloon opens the artery—is significantly faster than the national average. In addition, Dr. Kozinn also credits the medical center’s nursing team with being especially helpful during his recovery.

(Learn more about Surgery at ECMC ») 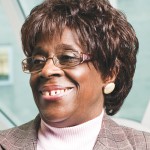 From patient to advocate.

After preparing for a kidney transplant at another Buffalo hospital, Barbara Breckenridge was sent to ECMC because her hospital stopped performing the procedures. The transplant at ECMC was successful and Barbara continued her follow-up care there as well. She also became an ECMC pastoral counselor to dialysis patients, a tireless advocate for kidney donation, and currently serves as the Director of Community Relations for the National Kidney Foundation of Western New York.

In August 2009, Barbara traveled to Australia to compete in the 100-, 200-, and 400-meter races at the World Transplant Games. Although she had no prior experience as an athlete, Barbara came home with five medals, including a gold! She has been participating in the Transplant Games since 2002, and has attended and won medals in four other Games in: Orlando, Florida; Minneapolis, Minnesota; Louisville, Kentucky; and Pittsburgh, Pennsylvania. With her new kidney and newfound success as an athlete, Barbara also competed in the 2011 Games in Sweden.

A life back on track.

Nick Giangreco is a Buffalo high school athlete who suffered an improbable, devastating stroke that left him unable to walk, brush his teeth, or get dressed. After investigating rehabilitation facilities in several other cities, Nick’s family decided that with the support of the family close by, Nick could receive the best treatment at ECMC. Nick’s physical therapist at ECMC helped him build up his endurance and improve his muscle strength while his occupational therapist helped him regain the skills he would need in everyday life.

Today, Nick drives, boxes, takes college-level courses, studies Italian after school, serves as president of his Philosophy Club at school, and has visited 21 campuses while making plans for college. Despite his hectic schedule, Nick volunteers at ECMC every week to work with teen and adult stroke victims and to give back to the hospital that helped him so much. 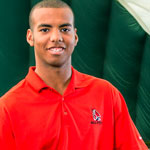 Winning Back a Healthy Recovery.

James Blackwell had an incredibly bright future on the horizon. A stellar golf game he’d honed since he was three, academic achievement and the support of his family had all aligned for the makings of an incredible success story.

One night, though, it could have changed in an instant with a late night car accident. For the promising athlete and his entire family, it was very nearly a worst-case scenario. When he was brought to ECMC that night, James was facing injuries that had the potential to derail his future plans—from wrist and finger injuries that could have ruined his golf game to bulging disks in his neck and back.

James and his parents (Roger Blackwell and Dr. Olivia Smith Blackwell) were familiar with ECMC as a trauma destination, and were comforted by the hospital’s commitment to quality patient services and better outcomes. In a fortunate conclusion, ECMC’s highly skilled trauma and emergency teams were able to stabilize James and set him on the healthy path ahead—one that’s seen him recover and embark on a collegiate golf career at Ball State University.

He still hits the links regularly, both competitively and alongside his family. And asked about his experience, he’ll be the first to tell you that having the right people looking out for him—in his emergency and in his life—has made all the difference.

(Learn more about Trauma and Emergency Care at ECMC ») 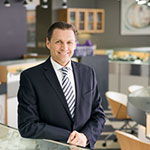 If you ask Andrew Moquin the secrets of his success in building Andrews Jewelers, he’ll tell you that it’s ultimately service that separates the good from the great. From his very beginning as a young business operator, he’s delivered an uncompromising perspective on customer care that’s made the difference for Western New Yorkers shopping for quality.

As a result, when he was looking for primary care that incorporated the best treatment—both medical and personal—VIP Primary Care with Dr. Howard Sperry was an easy choice. Andy credits the convenience of location, ease of scheduling, warm personal attention, and, of course, the exceptional level of quality care as his reasons for choosing VIP. In addition, with VIP Primary Care’s location on the ECMC medical campus, the close proximity to and relationships with excellent specialists have ensured that he never has to go elsewhere.

Too often, medicine lacks a personal touch. But at ECMC, we’re proud to go above and beyond to live up to the high service expectations of a community leader like Andy.

There are many ways to give to ECMC Foundation. For more information contact Susan M. Gonzalez, Executive Director, at (716) 898-5800.